Pollock with Mussel Broth and tomatoes

Michelin Starred chef Simon Hulstone was in last week and today I’ll talk you through the amazing main course dish he showed us how to prepare.

The Pollock fillet was marinated overnight in a Japanese type of Seaweed called Dashi Kombu with a drop of soy.

Simon made a broth by steaming some mussels in shallots, garlic, star annis white wine and water. After taking out the mussels he added double cream, soy and reduced down to a sauce adding at the very end capers, chives and four types of tomatoes including Inca, Thunderbolt, Peardrop, and Tomatillos. The Pollock fillet was pan-fried and then finished off in the oven. The mussel’s provided the perfect garnish to a dish that just tasted of summer. 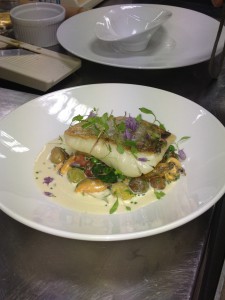