Last Sunday I was in the fishmongers and there was some lovely red snapper; my mind immediately thought that needs grilling!

Once the bbq was fired up, I lined both parts of the fish cage with lemon, lots of fresh thyme and Rosemary (from the garden), seasoned both fillets and sprinkled fennel seeds, a little dried dill and chilli cooking over the flame for about 8 minutes, turning over every 30 seconds. As much a summer winner as Murray, Froome, England Cricket, Mo, Lewis…I could go on.

I also decided to go to The Lockhart in Seymour Place because it’s new and had a South West USA theme. If you like pork belly (photographed) then this is a good choice although everything else left me a little disappointed. I never really understood Pork Belly; you might as well just buy some lard and gaffer tape it to your ass. Don’t bother with the restaurant although I wasimpressed with the waitress’s ability to pull of a brogue with a very short skirt; she was rubbish at serving but who cares!

I’m off to Heston’s “Dinner” next week so expect comments on meat fruit and general wonka style chemistry class cooking. 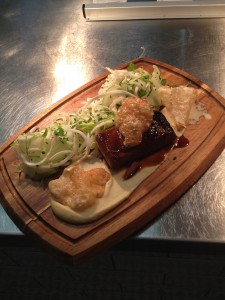