So this week I was taken for Dinner at Dinner; go it’s fun, original and a real treat, although you do feel like everyone dining is celebrating their 10th wedding anniversary, and there was the obligatory men only “Hedge Fund” table with the token bald man who wears a jazzy shirt’s to make up for it. The ones with no hair I’m told are generally in analytics, which is the chef equivalent of being on cold starters.

Heson’s concept is to go through the annals of British culinary history and pick out the best and most original recipes, going as far back as the Tudor’s; ironic as the girl on the table next to us looked a bit like Ann of Cleves.

The 27 Yankees dish’s are The Meat fruit (Pictured) which is a tangerine with edible skin filled with as much excitement that Heston could press out of a forced fed duck’s liver. The other is brown bread Ice cream, where the waiter makes it in front of you adding liquid nitrogen to an egg custard and churning in a Kendwood chef. Smoke billows out in a true “genius but insane science professor” sort of way, whist I turned Japanese and recorded everything on my phone (see picture).

I ate a lot, although didn’t feel bloated, so walked home, mainly because we didn’t have enough money left to finance logistics after the King Henry VIII size bill; it was worth it particularly as I’ll be able to afford top up my oyster card in three weeks. 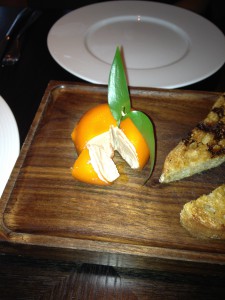 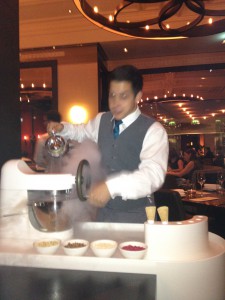