My favorite story of last week has to be the sign language interpreter used at Nelson Mandela’s memorial who was exposed as being a fake. When asked if he could sign the man in question said “Ati ynë që je në qiell, u shënjtëroftë emri yt.arthtë mbretëria jote; u bëftë dëshira jote,si në qiell, edhe mbi dhe.”

After the hand sign high jinks, I decided to make a bread and butter pudding using cranberries.

First I heated the milk and cream in separate pans until just up to the boil. In another bowl I whisked the eggs, salt and sugar together and then added the milk and cream. The bread was buttered and lined in a baking dish, which was itself greased; cranberrys were then sprinkled on top. The cream and milk mixture was added and then set a side whilst the oven was pre-heated at 180oC. The baking dish was then placed in a larger roasting tray and boiling water was poured into the larger until it came half way up the smaller, creating a bain-marie. The pudding was then cooked for 45 minutes.

One wonders why the organisers of the Nelson Mandala memorial gig didn’t think to get Mr. Tumble in to help, although the way our boys are performing down under I wouldn’t be surprised if he’d already been booked by The English Cricket Board to bolster up the batting middle order. 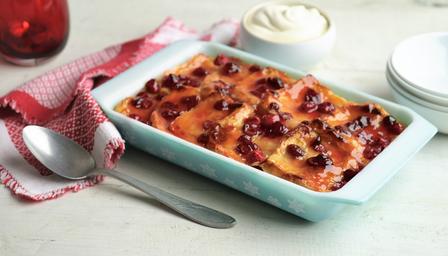